Anna Lucas is a London based artist predominantly known for her work film and video. She also makes drawings and still images. Her practice engages and develops from observations of social networks and individuals in response to specific geographic and architectural locations. Underlying these themes the work also refers to the processes of filmmaking and the materiality of film itself. She is interested in the camera as a research tool and with the simultaneous engagement and detachment that occurs in the moment of looking through a lens. 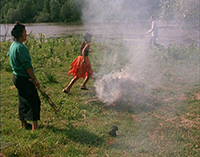 Early films (Trevety, Flyover, Just a moment, Adrift) explored how the moment of filming fictionalises reality and the way in which people’s behaviour and interaction with a location is inevitably altered by the presence of the camera. Her more recent 16mm films and videos often observe amateur experts and technicians – people who have a vernacular knowledge frequently related to the natural world, folklore or to pedagogical institutions (Kaff Mariam, Una de Gato, and Little White Feather and the Hunter).

She has worked with a film conservator (Gustav, Graham and Lee, 2011) long lens users (Hunt and Hide, 2006), retired botanists, (Atlantic Botanic, 2007) a mortician (Demonstration 50.15, 2009) and teenage boys in school (Seventh Heaven, 2006). It is these people absorbed in their own act of looking, studying, playing, praying rather than the subject of their interest that is the focus of her work. 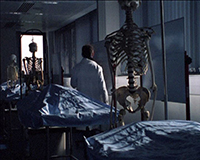 Her camera unobtrusively documents, distancing her subjects from the viewer, yet at the same time encourages a rigorous engagement with features of everyday life. Her work creatively integrates what could be characterised as an intuitive response to the subjects she documents, whilst still operating within a structured, cohesive framework which give her works their textured and distinctive quality.

Anna Lucas’ blind carbon drawings collectively entitled Blind Movies were the starting point for Land of Silence and Darkness, a series of events around perception and neuroscience she organised as part of a Wellcome Fellowship at the Department of Physiology, Anatomy and Genetics and Ruskin School of Fine Art and Drawing at Oxford University in 2008. This ongoing enquiry into vision and perception informed the studio-based process for the film Things that had stories rubbed out, 2010 and continues to develop through a series of live collage events and resources as part of the Learning programme at Tate.

Anna Lucas’ practise has evolved in conjunction with her teaching and learning work within gallery education, dance and performance collaboration and further education contexts. Her pedagogical interests or approaches focus on;

Her work within Gallery education has provided opportunities for experimentation within and beyond the studio, for creating new film and video works, (View, new, Seventh Heaven, Lost, The space between your mind and eyes) and print and dissemination-based material (How to…, Wildcraft, Silver concertina, and RGBresources). She is currently part of a practise based research group within Tate Learning looking at ways in which artists practise can inform the learning programme, and working with live studio environments to inform and develop engagement with Early Years and Families.

She is a part time senior lecturer in Fine Art, (Lens based media) at De Montfort University, Leicester and a regular contributor to the Moving Image Studio at RCA where she has co-devised a self-reflexive 16mm film-making workshop as part of the moving image programme with artist Stuart Croft. She has also been a visiting lecturer at Winchester, Dartington, Canterbury, UEL, Ruskin Schools of Art.

As a film-maker she has worked with a range of live-art and performance based practitioners creating moving image works that extend documentation of live events, operate as performative portraits, or as cross disciplinary collaborations in their own right. These have involved sustained engagement with learning disabled performance companies Corali and Anjali (1999 – 2009), work with devised theatre company Uninvited Guests, live artist Tom Marshman, choreographer and dancer Rebecca Skelton. She has also worked with poets John Cooper-Clark, Lavinia Greenlaw, Liz Lochhead and Mimi Khalvati. These collaborations have contributed to a greater understanding of devised performance, embodied learning, live presence and duration and their connection to filmmaking.