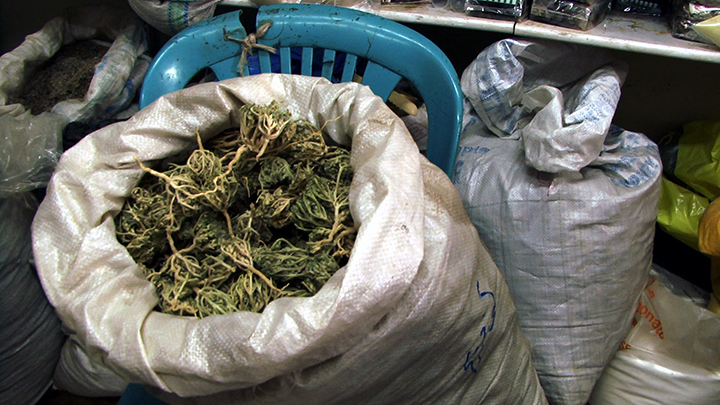 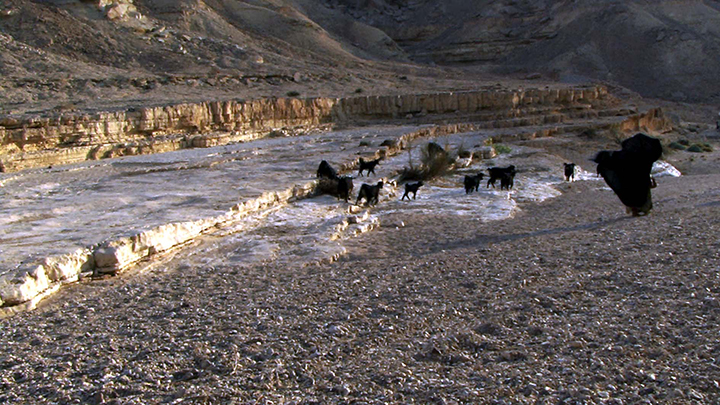 The film is a kind of pilgrimage in search of a plant known as Kaff Mariam in Arabic, or Rose of Jericho and Resurrection Plant, from Brixton markets to it’s native environment in the deserts of the Middle East. Starting in Jericho and moving through Palestine to Sinai, the film presents encounters with people and the landscape, which are as evident and significant as the plant itself.

In this work the juxtaposition of mesmerising landscapes is punctuated with subtle political inflections, the occasional shot of a border fence, or the measuring of territory in the disputed West Bank in Kaff Mariam, for instance. And even in the vast, remote locations of the desert and rainforest, small symbols of globalisation can still be seen: a blue IKEA bag, carrying the possessions of a seventy year-old goat herder as she wanders through the Sinai desert; an Amazonian guide wearing a t-shirt emblazoned with a Nestlé slogan; or a trademark McDonalds logo on the back of a factory worker’s clothes as he bundles Uña de Gato bark in Pucallpa, Peru. Filmed during a period of political unrest, increasing scientific discovery and ecological awareness, the works present poignant reflections of the remedial potential of nature. While the US government and pharmaceutical companies invest in the study of indigenous plant knowledge in environmentally sensitive areas such as the Amazon rainforest, as botanic research is used to track climate change, and while Bedouins use plants such as the Kaff Mariam to increase fertility, Lucas’ timely investigations highlight the hidden significance of local knowledge against a backdrop of global concern.

Kaff Mariam and Uña de Gato were funded by FACT ad Film London. They were developed following research made in Brixton markets, London, as part of Wildcraft 2006. They were first shown as part of Here and your here, a solo exhibition at FACT, Liverpool, and subsequently at No-where, Bethnal Green, London, as part of an ‘in conversation’ with Marcus Coates. The work has toured to Konstcentrum in Gavle, Sweden in 2009 and to CCA Galleries, Glasgow in 2010.