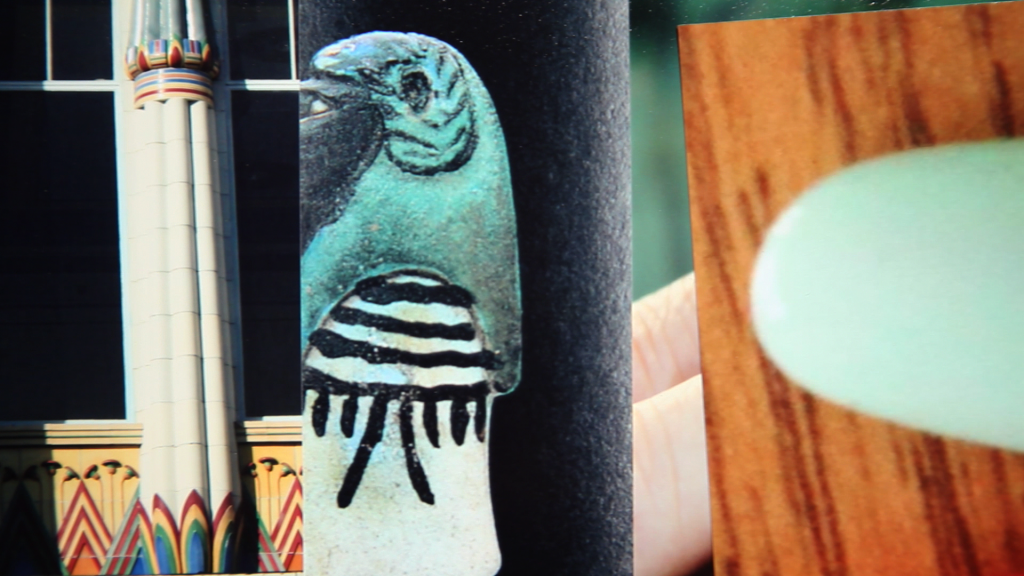 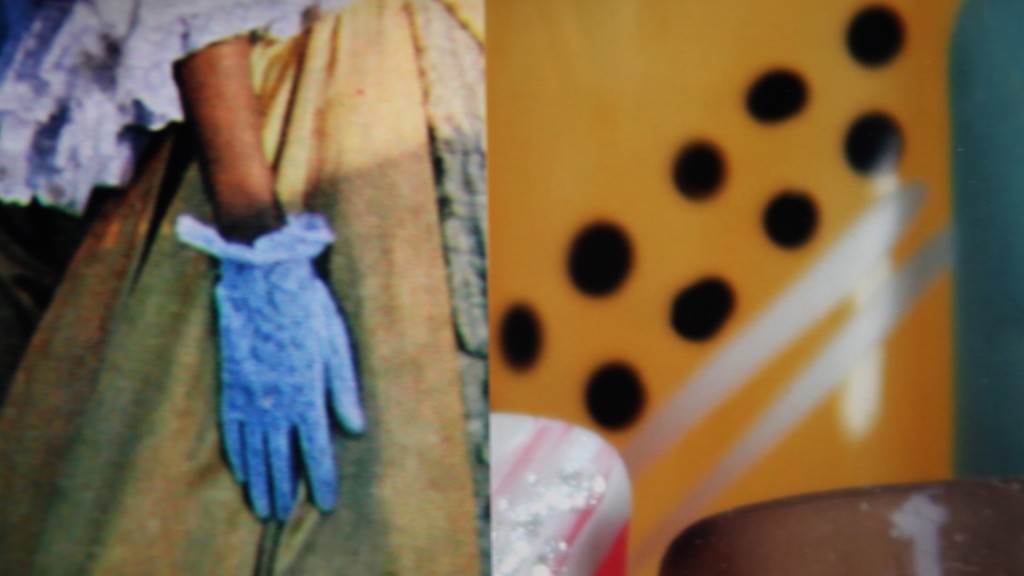 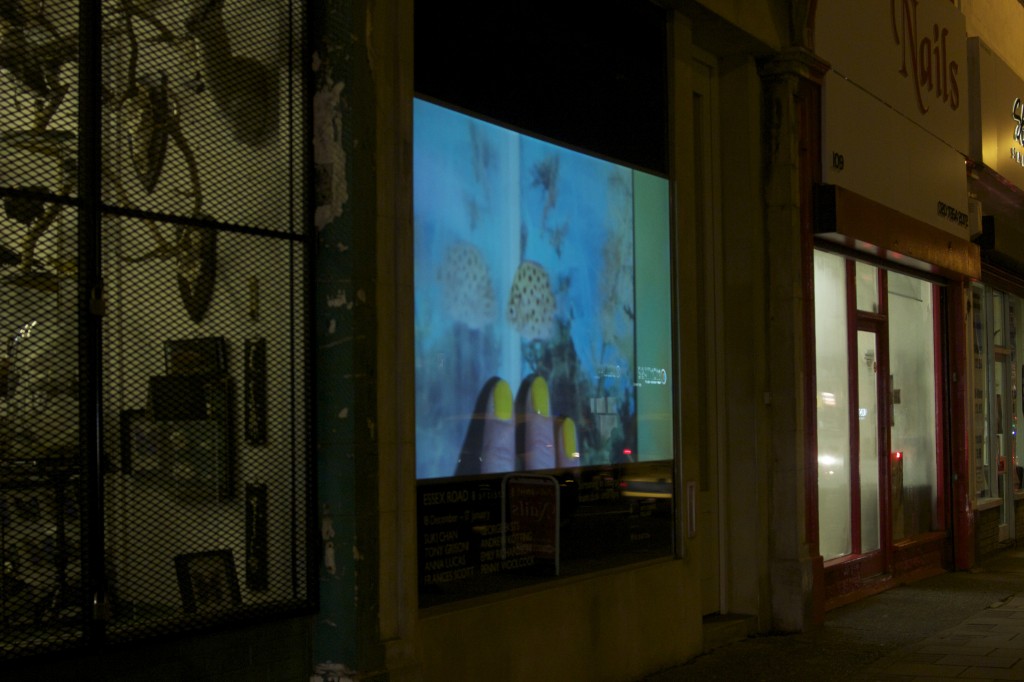 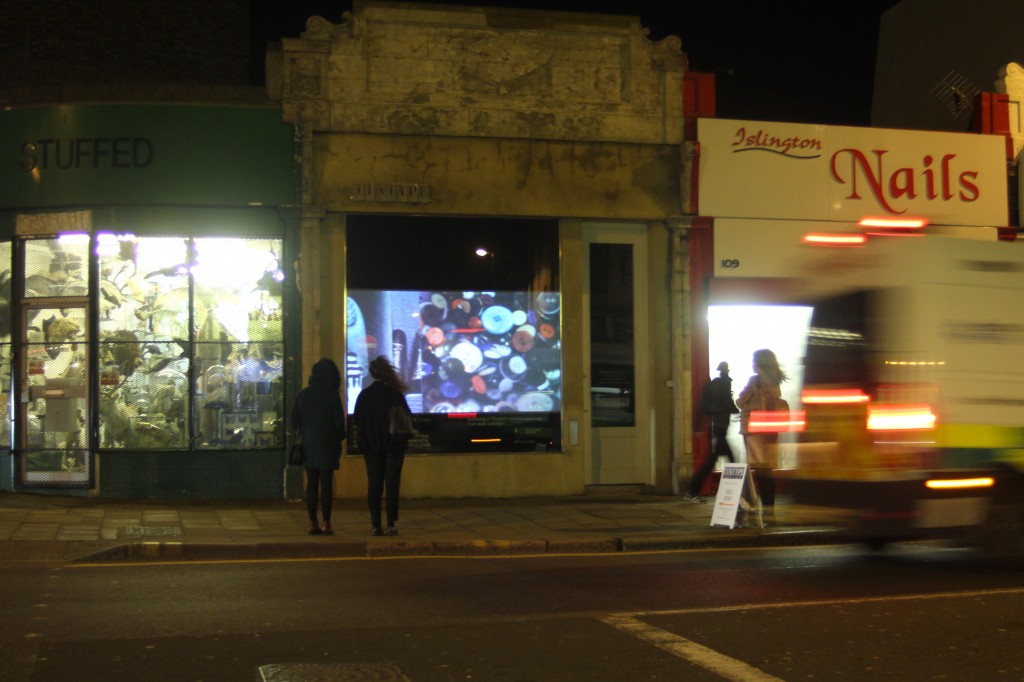 This film was commissioned by Teresa Grimes at Tintype Gallery in Islington, London. The project was conceived as a response to Essex Road where the gallery is located.

Six artists were invited to respond to the site for a month long back-projected screening onto the gallery window from mid December 2014 to mid January 2015.

Inspired by the gallery’s location between a beauty salon and a taxidermy shop, conversations with a psychiatric nurse, and a description of a photo of an Egyptian belly dancer, this flickering film of still images makes connections between tropical fish, fur and fingernails.

Running in tandem with the works Opi 21, Oopsy Daisy, Tiger Lily and Apex by Frances Scott are ongoing conversations and shared working methods between artists Anna Lucas and Frances Scott. The two films intersect, whilst simultaneously operating as discrete works.

A publication is being developed around the processes and conversations between me and Frances Scott in making the work, with Leanne Turvey as an outside eye. Some unused notes from this are here The Slow Reveal – text work in progress around Opi 21, Oopsy Daisy, Tiger Lily

Extended text, extracts from which appear as inter-titles within the film:

In a glass tank within a psychiatric ward, a nurse in white, his walkie-talkie on his hip, raises his arms above his head, making a flowing movement alongside a middle-aged man. The sound is muffled, but punctuated by an occasional shout, and some music.

Make the hair stand Up on your arm
Teach you how to dance
Inside the funny farm
Not alone, I'll be there
Tell me when you want to go

She is the Fox. A foxy kiwi with red hair and long nails. She used to live with the Wolf. He’s the scriptwriter. He’s the one that got away. She is a cleaner, and now she lives above the Angel Aquarium.

Two floors down, in the tropical basement the glass squeaks as the fox polishes it. Red strands brushing across its smooth surface. Smears reflect the fluorescent light obscuring the backdrop of Egyptian ruins. The tanks emit their own glow.

Clear fish whose spine alone is visible circle around plastic plants swaying in the current generated by the water pumps. Everything survives under that artificial light. There is a lightheaded smell of chemical cleaning products.

Someone taps at the glass for a while, looking in, but not seeing.

The woman in charge smiles, but her manner is curt. Rosehip red nails match her lips. Young staff shift stainless steel bowls of pale blue solvents and sodden wipes from under the lamps. Surgical masks cover nose and mouth emphasizing curious, and furtive gazes, their eyes lowered if a look is returned. Instructions are given in Vietnamese.

After dark, three doors down a small fox like dog stretches and circles the space, nails clicking on the polished vinyl floor. She lifts it up and wraps it around her shoulders, its head lolling on one side, tail hanging on the other. Black chiffon crisp against its coat. She runs her painted nails through its fur, down it’s legs, drawing its claws together and holding it’s feet. They listen to the sounds of the water filters and pumps. They watch the movement in the tank. She strokes and taps the glass. Golden fish follow her glittery fingertips.

The nurse is released. His patients are elsewhere now. He owns the tropical fish shop now. He pinches and flicks the tank as if on a touch-screen. He watches a moonlike white fish; it’s plumped lips kissing the glass. He loves the kissy fish. It moves slowly, one eye on the Egyptian ruin, one on the goldfish in the other tank who was born with only one eye. These are the rejects, so he keeps them to display. The males are the most beautiful.

Across the street an elderly man is talking to a customer on the threshold of his shop. He has a thin line of moustache on his top lip. His trousers are tucked into his socks He stands across his racer bike, poised to leave. His velvet jacket is a deep wine red. He describes a photo.

“I have this image from when I used to deal in antiques. I bought this photo, but I never wanted to sell it. It has a line of people across the middle. It’s a desert landscape, with this line of people, and they are watching this woman, a well- built woman belly dancing. It’s like a cross, with her across the centre and the line of people behind and you can see the beads and ribbons on her apparel, what there is of it, swinging and swirling around. And there’s this line of people behind, lined up across the desert. You have King Farouk, I think it is, in a fez, with his hand on his cheek, leaning his head to one side. And on the other side, a little boy, maybe his son, leaning with his hand on his cheek the other way. It’s a great shot. It’s the best of all the images I ever bought.”